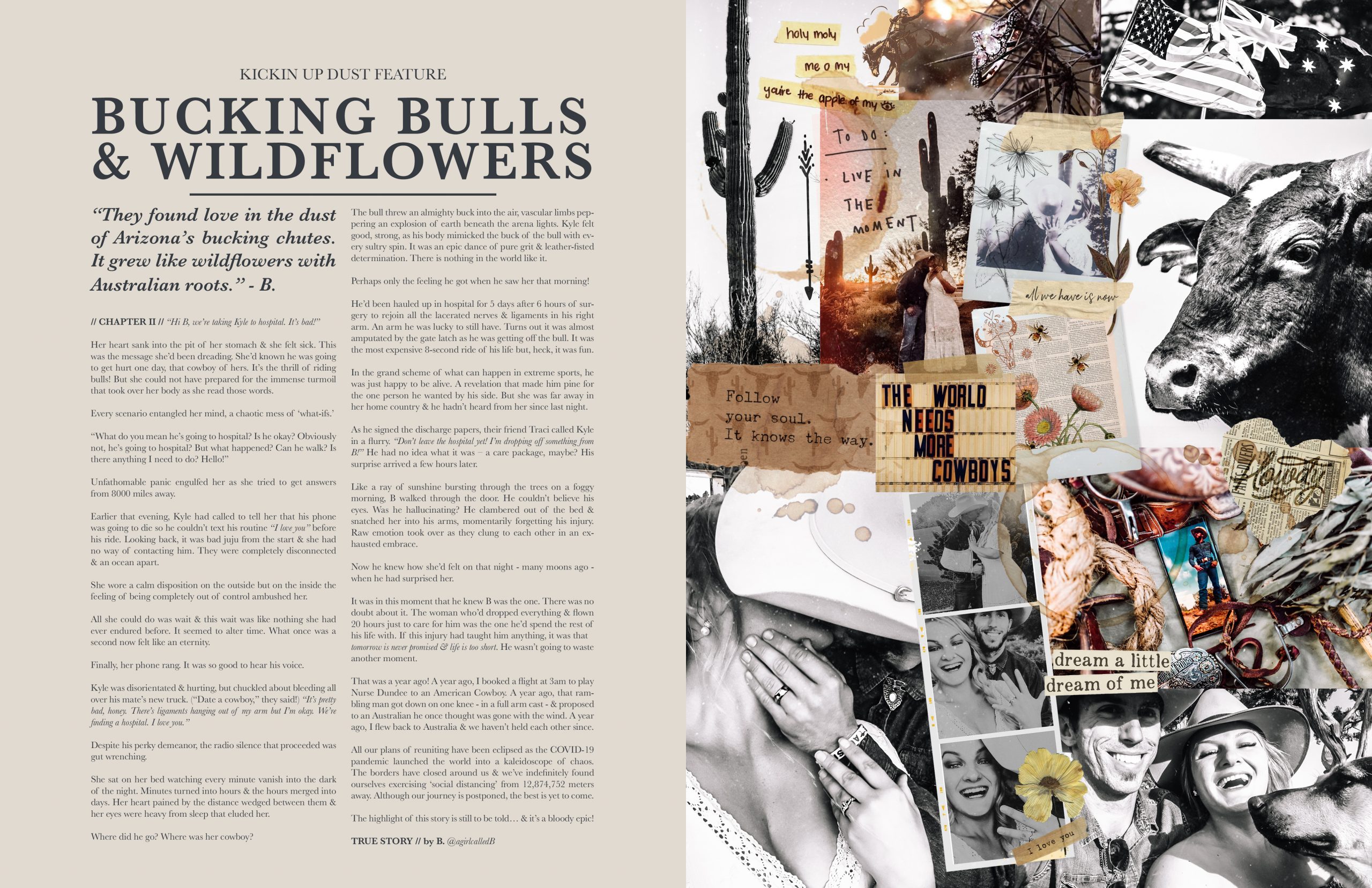 “They found love in the dust of Arizona’s bucking chutes. It grew like wildflowers with Australian roots.” – B.

Her heart sank into the pit of her stomach & she felt sick. This was the message she’d been dreading. She’d known he was going to get hurt one day, that cowboy of hers. It’s the thrill of riding bulls! But she could not have prepared for the immense turmoil that took over her body as she read those words.

Every scenario entangled her mind, a chaotic mess of ‘what-ifs.’

Unfathomable panic engulfed her as she tried to get answers from 8000 miles away.

Earlier that evening, Kyle had called to tell her that his phone was going to die so he couldn’t text his routine “I love you” before his ride. Looking back, it was bad juju from the start & it now meant she had no way of contacting him. They were completely disconnected & an ocean apart.

She wore a calm disposition on the outside but on the inside the feeling of being completely out of control ambushed her.

All she could do was wait & this wait was like nothing she had ever endured before. It seemed to alter time. What once was a second now felt like an eternity.

Finally, her phone rang. It was so good to hear his voice.

Kyle was disorientated & hurting, but chuckled about bleeding all over his mate’s new truck. (“Date a cowboy,” they said!)

“It’s pretty bad, honey. There’s ligaments hanging out of my arm but I’m okay. We’re finding a hospital. I love you.”

Despite his perky demeanor, the radio silence that proceeded was gut wrenching.

She sat on her bed watching every minute vanish into the dark of the night. Minutes turned into hours & the hours merged into days. Her heart pained by the distance wedged between them & her eyes were heavy from sleep that eluded her.

Where did he go? Where was her cowboy?

The bull threw an almighty buck into the air, vascular limbs peppering an explosion of earth beneath the arena lights. Kyle had felt good,  strong, as his body mimicked the buck of the bull with every sultry spin. It was an epic dance of pure grit & leather-fisted determination. There is nothing in the world like it.

Perhaps only the feeling he got when he saw her that morning!

He’d been hauled up in hospital for 5 days after 6 hours of surgery to rejoin all the lacerated nerves & ligaments in his right arm. An arm he was lucky to still have. Turns out it was almost amputated by the gate latch as he was getting off the bull. It was the most expensive 8-second ride of his life but, heck, it was fun.

In the grand scheme of what can happen in extreme sports, he was just happy to be alive. A revelation that made him pine for the one person he wanted by his side. But she was far away in her home country & he hadn’t heard from her since last night.

As he signed the discharge papers, their friend Traci called Kyle in a flurry. “Don’t leave the hospital yet! I’m dropping off something from B!” He had no idea what it was – a care package, maybe? His surprise arrived a few hours later.

Like a ray of sunshine bursting through the trees on a foggy morning, B walked through the door. He couldn’t believe his eyes. Was he hallucinating? He clambered out of the bed & snatched her into his arms, momentarily forgetting his injury. Raw emotion took over as they clung to each other in an exhausted embrace.

Now he knew how she’d felt on that night – many moons ago – when he had surprised her.

It was in this moment that he knew B was the one. There was no doubt about it. The woman who’d dropped everything & flown 20 hours just to care for him was the one he’d spend the rest of his life with. If this injury had taught him anything, it was that tomorrow is never promised & life is too short. He wasn’t going to waste another moment.

That was a year ago!

A year ago, I booked a flight at 3am to play Nurse Dundee to an American Cowboy. A year ago, that rambling man got down on one knee – in a full arm cast – & proposed to an Australian he once thought was gone with the wind. A year ago, I flew back to Australia.

We haven’t held each other since.

All our plans of reuniting have been eclipsed as the COVID-19 pandemic launched the world into a kaleidoscope of chaos. The borders have closed around us & we’ve indefinitely found ourselves exercising ‘social distancing’ from 12,874,752 meters away. Although our journey is postponed, the best is yet to come.

The highlight of this story is still to be told… & it’s a bloody epic!

PS. Discover our lives in ‘real-time’ on Instagram @agirlcalledB