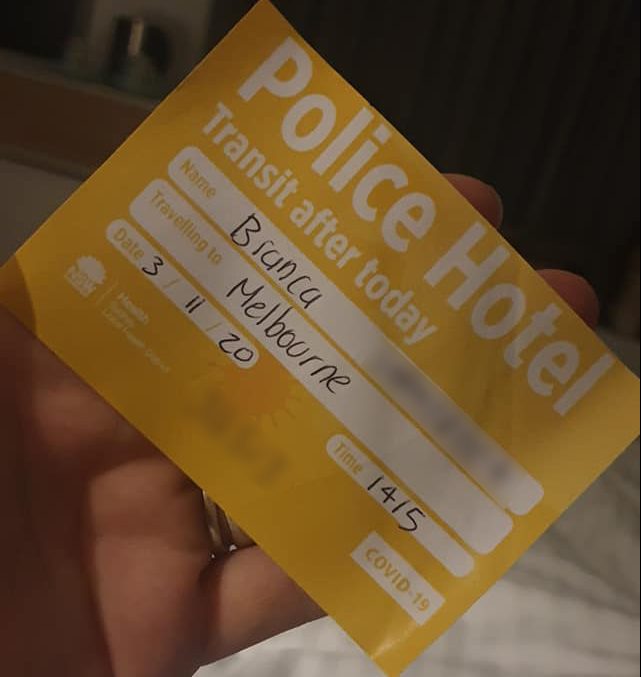 An unforseen chapter in our insane story… I got detained in NSW!

I can appreciate the humour in it now – because that’s one hell of a bonus chapter – but last night was many, many tears & absolute devastation with Kyle on the phone being a bloody sweetheart from 8000 miles away!

So, I’ve spent the night in a luxurious, 5 star ‘Police Hotel’ & am on a plane back to Victoria today.

Despite being a mere 10 mins from the US Consulate, I am not allowed to leave to attend. Yup! You’d think having to spend a year, 8000 miles apart was enough hard work, but apparently the universe wants to really dig the spurs in to see how we buck.

I had done nothing wrong.

All my paperwork is in check.

I was not ‘sneaking’ in, or breaking any laws.

I had an approved state travel permit, which was further approved by the US Consulate who only booked my expedited emergency appointment when they received a copy.

I have around 500 pages of supporting documents.

I am one schooled, composed, professional SOB, that gave off no reason at all to be detained.

I even provided:- full itinerary of my 24 hours in NSW, to comply with self isolaton.

– affidavit of my health.

– all email communication from US Consulate.

– all email communication from everything, EVER!

I also had called NSW Health Service last week to confirm everything was correct. They admitted they have NO concerns about my health. Further verified by the fact I haven’t been screened for COVID once. No temperature checks, nothing. I am at more risk contracting the virus being in this bloody hotel, than I was at my home among the gum trees!

At the airport, the border health document checker – who was heartbroken for me – low key said I had basically drawn the short straw on “interpretation” from too many conflicting departments. She gave me her boss’s email – who I emailed with all supporting documents at 1am this morning – & proceeded to pass his details onto the US Consular Officers.

My fate was sealed by a civilian who reviewed 2 piece of printed paper & declared my reason for being in NSW wasn’t ‘important’ enough!

Albeit, the Businessmen next to me went straight through for their ‘9am business meeting’, no worries. I guess something that could’ve been done on Zoom, is more important than reuniting with my person after a year apart?

I have been caught in the middle of red tape & political BS on this one. Never thought I’d see the day in my own country, where I was given less rights than a criminal!

I was told that “Consular processing is not a legal obligation. Is anyone telling you to leave Australia? No! So, you can pay $3000 to quarantine or go home.“

It’s taken me a year to get this appointment & these bright sparks think the US Consulate is just rescheduling emergency Greencard interviews to fit their BS political agenda? Is this a joke?

I was forced to change my permit to a “transit” permit, so they could process me with all the other people they were escorting to the airport the following day. Most for international connections.

I had a label put on my arm like a moo-cow & was accompanied by several armed escorts to a military bus that took me to the Pullman Hotel & Resorts, where I was checked in by NSW Police & Military.

It felt like I was back at Basic Training (long story, yes, I was in The Army). Legit thought I was going to have to number off this morning!

NB. The Police & Military were absolutely lovely. So were the hotel staff. But the NSW Health officials who caused the chaos, were a bunch of very passive aggressive civi’s hellbent on exercising their overlord’s powers! “Ease up, Vivian. I get it. Your stick is bigger than mine!”

I will say that anyone who thinks this is okay or justified, lives in a very naive bubble & has not experienced this first hand. You should be worried & furious at how easy a law abiding citizen – who committed absolutely no crime – was detained without any reason. I officially feel like a prisoner in my own country.

Even I can see the positive of being delivered an amazing breakfast, a hot coffee, waking up to sunshine & being alive.

So, what’s done is done.

I face planted off my trusty steed, sat in the dirt, popped my bloody calf muscle (true story) & now I need to dust myself off, get back in the saddle & work out a new direction.

Nice try, universe, you hormonal jerk. But I don’t give up that easy.

Here’s a cheers to the memory & a middle finger to the Government Leaders who keep defining a separate set of rules for famous people, athletes, politicians & money.